We have this saying we use in our house, “you don’t have to eat the potato,”  that serves as a gentle, coded reminder that it’s okay to change course or back down in an argument (well, it used to be coded but now it’s on the Internet).  It comes from a Shakespearean play episode of The Amazing World of Gumball my ten year old was reading binge-watching in which the kids get in a fight with their parents, their parents refuse to do anything for them until they apologize, and rather than apologize or admit to wrong-doing, they resort to eating a raw potato for dinner.  When our family finds itself in the grips of stubborn conflict, one of use will say to the person who is doing the heel-digging (and though the role changes hands, it’s usually obvious in each situation who is doing the heel-digging), “you don’t have to eat the potato.”  It’s our way of saying that it is okay to let go, and further, you can let go without having to face an “I told you so.”  The action of dropping the potato and moving on is louder than words, and we will acknowledge it by moving on with you.  Sometimes in this life, we start to feel backed into a corner by an opinion we’ve held or a decision we’ve made and I want my kids to grow up in a home that acknowledges changing your mind or changing your course for what it is – courage.

Before I pontificate all the ways I’ve mastered practiced this skill in my ten years of parenting (ten years people…surely that makes me an expert and my “10 Years of Service” plaque is in the mail), let me tell you that my experience with eating potatoes is vast and long.  I come from a long line of potato-eaters (who are, coincidentally, from Ireland).  I have actually seen a member of my family argue that the ocean was a river while in plain view of the ocean.  I spent my own entire childhood refusing to clean my room because “I liked it messy and I could find things easier that way.”  So, it’s not too surprising that I’m now raising a child who would rather eat a raw potato than change his point of a view and another whose favorite food is actually potatoes.  It’s also not surprising that my little potato eater’s most adamant point of heel digging is keeping a clean room.

Folks, this kid’s room can reach epic proportions of messiness, and like I mentioned, I speak with some authority on the subject of messy bedrooms.  He likes to keep every toy he has played with in the last month in easy arm’s reach (all over the floor) and if you suggest that the toys may be easier to find or less likely to break if he puts them where they go, he will dig in further and assert that the toys are already where they go, and that he has “organized” them this way on purpose.  And it’s not just toys.  He also likes to keep all the things.  Get a new blender for Christmas?  Awesome, he’ll hang onto that box for you.  Broken remote control to the DVD player?  Sweet, that’ll come in handy.  You don’t want that copy of Gigliyou got in your family’s White Elephant exchange?  Oh, he does.  He definitely needs that.  When my little man was four years old, I went into his closet to get his laundry basket and found a pile of kitchen trash hidden behind it.  I’m talking actual food waste, like empty yogurt containers and apple sauce jars, items he had taken right out of the recycling bin and trash can.  I asked him why these things were in his closet and he did not have an answer for me.  We had a discussion about the importance of keeping food waste in the kitchen and I even tried some heavy-handed scare tactics about tracking bugs into his bedroom.  I left the room feeling confident that it would not happen again and also worried that I had not set aside enough money in my kids’ therapy savings accounts (it’s like a college savings account, but without the tax break) for treatment for severe hoarding.  I was wrong.  The next week, I found another pile of granola bar wrappers and banana peels on his closet floor.  I’m not going to lie.  At this point, I was fairly wrecked.  I was convinced that this was an early warning sign of a serious issue and I sat down with my son to get to the bottom of it.  Why was he stealing trash and hiding it?  How could we help?  And where had I gone wrong?  Finally, in his sweet four year old voice, he said, “I wanted to save it from the fire.”  The fire?  What fire?  “The fire where the trash goes mama.  I don’t want our trash to get hurt in the fire.  Like in the movie.”  The movie.  Sweet relief flooded over me as I remembered the scene in Toy Story 3where the toys are on a fast-track to the incinerator in the garbage dump.  My son was not a hoarder!  He wants to save the trash!  He’s being kind!  It took a lot of convincing and a little stretching of the truth (Did you know that all garbage dumps convert the waste into reusable energy?  Yeah, me neither.) but he agreed to leave the food waste where it belongs.  Flash forward three years though, and that’s about the only progress we’ve made on his messy room. 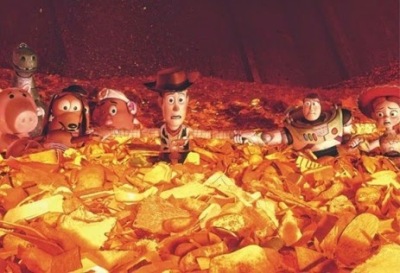 Those toys look terrified.  I can see why my son wanted to rescue the trash.
Thanks a lot Disney/Pixar.  I’ll send you the therapy bills.

But here’s what I’m learning about living with a potato eater.  He needs his course correction to come from a place of self-discovery.  This means that I need to take a backseat and let him figure some things out on his own.  Sometimes, I let his room go a little longer than I’m comfortable with myself, and he’ll lose something important to him, or break a toy, or step on something and get hurt.  In those moments I bite my tongue so hard it bleeds (because “I told you so” is the enemy of the potato eater) and wait.  More often than not, he’ll acknowledge that his room was too messy or the toy was in the way.  He’ll clear a path (which is not the same as cleaning but it’s progress) and put away the things of real and lasting value.  Yesterday, when we were doing our annual post-Christmas room clean/put away the new things/donate the things we are finished with ritual, he asked for my help (!) and even mentioned afterward that it was easier to play on his empty floor.  I nod and sometimes even add a little “That’s a great idea, I might try that in my room, thanks!”  Later, down the road, we’ll talk about how changing our minds is brave and wise, but for now, I’m treading lightly.  I’m learning that this tread lightly approach works with kids or spouses, friends or family.  When faced with a potato eater, I can check my ego at the door, drop my own potato first and let go of my need to be right or verbally recognized.  It’s not about me anyway.

I was talking with a friend the other day about course-correcting and change and how it gets a bad rep even in our adult lives.  We were discussing the various incarnations of managing our kids’ chores.  In my house alone, we’ve had chore charts, chore tin cans with popsicle sticks, chore magnetic boards, chores on clothespins affixed to door hangers, a “Work for Hire” board, and the latest, a total re-branding of chores as “teamwork” that is incorporated into the boys’ daily lesson plans.  All of these systems work for awhile, until they don’t, and then I make a change.  I made some kind of self-disparaging and half-joking comment about my inability to make a system stick and my friend pointed out that if change is required to make the thing work, that’s not exactly a failure.  And she’s right, it’s not.

It’s hard to understand why no one has taken on any of these jobs.
That’s a whole dollar for cleaning all the windows and mirrors.  A whole dollar!

There are people in this world who are remarkably adept at creating a routine that lasts.   You may know some of these people.  They wake at the same time every day, eat the same thing for breakfast, do the same exercise their entire adult lives and they thrive on this routine.  It works for them, so they don’t need to change it, and in fact, changing it could be detrimental to their overall quality of life.  Then there are the rest of us.  We start off strong but often falter and it is at the point of faltering where we can make an important decision.  Do we course correct or do we eat the potato?  Instead of claiming defeat or worse, digging our heels into the choice that is not working, can we redefine success to mean the ability to change our minds?

As for our family, we’ll stick with our now not-so-secret phrase and keep creating a safe space for admitting we are wrong, changing our minds and changing course.  And I’m sure we’ll eat a few potatoes in the process.  Hopefully baked, with a lot of sour cream.

7 thoughts on “You Don’t Have to Eat the Potato”