This morning a news article popped up on my Facebook timeline about how people are upset about Starbuck’s 2015 Red Cup design.  Like a total Internet dummy, I clicked on that link.

There I was confronted with my first “War on Christmas” faux outrage article of the year.  And it’s only November 6th.

In a nutshell, some people are upset about Starbuck’s cup design because it is plain red, and does not feature any seasonal decor.  Look, I hear you, to a point.  The cup is kind of boring.  I imagine this is how the graphic design meeting went down.

But to turn this into some kind of battle in the so-called War on Christmas because the cup is missing its usual (secular) holiday graphic snowman is just lunacy.

Every year when this debate rears its head, memories of my childhood float to the surface.  I remember the greeting cards from relatives that said “Happy Holidays” or “Season’s Greetings” and I also remember no one being offended by them in the least.   But memory is a capricious historian, so I did a little digging.

Last month, the Wentzville Community Club held an event celebrating the town’s anniversary and it featured a plethora of memorabilia from clothing to washboards, from old toys to newspapers.  The newspapers were my favorite part.  I flipped through articles written in the 1950s and marveled over the commonalities to themes our town still faces today, like funding for the school district in a growing community.  But things got really interesting when I stumbled upon the papers released near Christmas.  Page after page of the paper featured paid advertising from companies all over town, many wishing newspaper patrons “Merry Christmas” and many others wishing “Season’s Greetings” or “Happy Holidays” or “Holiday Cheer.” 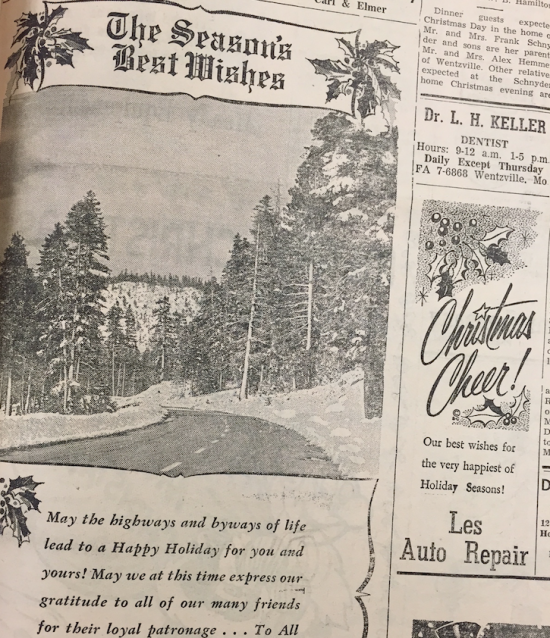 Just look at those ads.  Talk about a war on Christmas!  It’s no wonder Kelley’s Beauty Shop is nowhere to be found in Wentzville these days.  I’m sure that Kelley was run straight out of business after she featured that heathen child holding a stocking.

This one is the most confusing of all.   First it says “Happy Holidays” but later it mentions Christmas, then it references the Pagan holiday Yule but there are angels decorating the tree which makes it unclear if that tree is a Christmas tree or a Yule tree and the babies are naked.  How do we know if we are supposed to be offended or delighted?

The ads went on for pages.  It was immediately clear to me why the streets were filled with angry mobs demanding an abolishment of the words “Happy Holidays” in the 1950s.

It turns out that outside of one pamphlet released by a communist conspiracy group, most people in the 1950s were able to view these egregious advertisements and instead of feeling offense feel … joy?

They saw words of merriment where today we see words of political agenda.  They gladly accepted their neighbor’s wishes of joy instead of ascribing malicious intent.   In short, they behaved like rational grown-ups.

Every year, writer Rachel Held Evans posts this very useful graphic to help you determine whether or not you are being persecuted during the holiday season:

Because the truth is, there are very real examples of religious persecution happening in this world every single day.

Being handed a plain red cup at Starbucks is not one of them.

Here’s the bottom line.  We can either accept one another’s holiday wishes in any form with gratitude, or we can dismiss them because they don’t meet our expectations of what should be said.

When we choose the former, we are reminded that for the most part, people mean well with their words and actions.

When we choose the latter, we must accept the fact that we are the only ones taking the Merry out of our own Christmas.

And if you still can’t move on, draw your own snowman on your Starbuck’s cup.